A student of the UIT’s Computer Engineering Faculty - Mr. Doan Van Hieu, whose paper has been accepted to be published in the proceedings of the ACOMP2021 (The 15th International Conference on Advanced Computing and Applications). His paper titled ‘A Fast Keccak Hardware Design for High Performance Hashing System’ was conducted under the supervision of Dr. Lam Duc Khai.

Originally, the crypto currency was invented and developed on the Blockchain Technology. Its acceleration has attracted much attention from experts in diversified fields, especially in academic research. When it comes to crypto currency, Ethereum as an example, falls into the category. There is no shortage of people who have shown their interests in the crypto currency. Thus, it has gained the fame as the most valuable in the crypto currency marketplace. This fast popularity has led to the Ethereum mining, the work of creating blocks, which is aimed at satisfying people’s increasing need for storage capacity of transaction. It is demanded that the so-called miners participate in solving the Ethash or the Ethereum Proof-of-Work in order to produce a result to the querries. In the paper, a hardware architecture has been put forward to implement a system of block mining called the Ethash. With the goal to enhance the Ethash block’s performance, the team of designers proposed that they apply the Keccak algorithm’s hardware architecture. The designs have been implemented on Xilinx Virtex 7 FPGA-VC707 platform. The proposed Keccak blocks’ architecture shows that the throughput is 8 Gbps and the efficiency is 5.5 Mbps/Slices. The Ethash system’s hashrate is 88KH/s at the 19,231MHz. Thanks to the achievement, the team's research results have been accepted for the publication in the proceedings of the ACOMP2021. 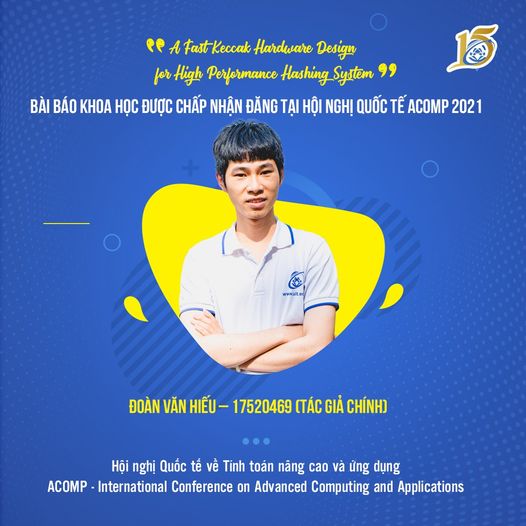