September 9th 2017 was the day when a “HackaDay 2017”- a student-wide Information Security Competition by PwC Vietnam was held. The contest attracted 25 teams from Ha Noi, Ho Chi Minh City and a Malaysian visiting team to compete. 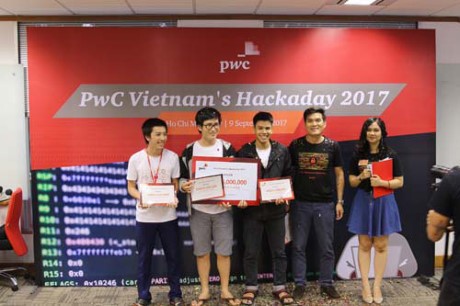 “HackaDay 201” is the contest where the competitors are put into challenges with tasks such as software source decompilation, attacking techniques to website application, for example SQL injection XSS, Sesion Hijacking, or exploiting software vulnerabilities. The Los3r team from UIT, including Phan Thanh Duy, Pham Hong Phi, and Bui Minh Tien Dat finished the tasks in the shortest amount of competing time; finally successfully achieved the highest scores.

Mr. Robert Trong Tran, Head of the PwC Vietnam Internet and Network Security Service, expressed his hope that the contest would be the bridge between talented persons in information technology in Vietnam and a rewarding, memorable experiences to the students.