The twin brothers together conquered the informatics prize

These twin brothers are students in the third year student of Security Honor of the University of Information Technology, VNU-HCM (UIT).

Besides the personal rewards, Nguyen Van Thong also brought his teammates to the University with many achievements such as second prize in UIT ACM 4 contest; 3rd Prize of UIT in ACM 5; 2rd Prize Fujinet UIT ACM 6; 1st prize in UIT ACM 7; 1st prize in the UIT Hacking Contest; Third round of the Vietnam International Student Programming Contest, Vietnam (ACM-ICPC). 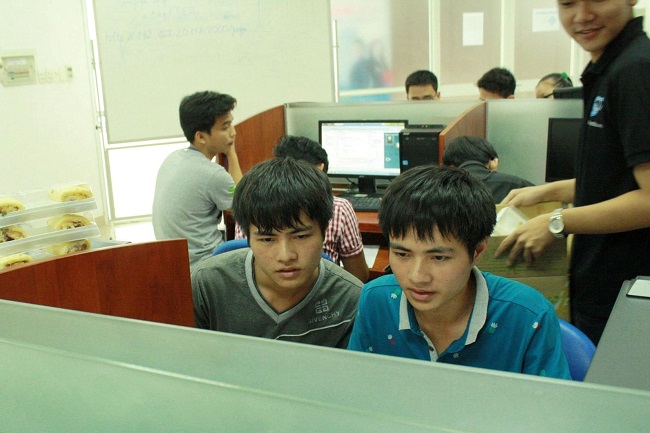 Love programming and select the University of Information Technology

Thong and Thai are two of the six children of a farmer family in Nghe An. Although all day attached to co-workers and wood carpenters but the parents of these two boys are always looking forward to their children achieve good results in learning and work. Thanks to this, these two talented twins are encouraged to promote their abilities.

Van Thong said: "In the 11 th grade, I achieved the best student in the field of Informatics with the highest achievements in the field, friends and teachers advised me to follow the IT industry to be able to develop myself. At the time, however, I had the intention of following architecture as my passion at painting was my childhood. However, when he was trained for three months in the preparation of the province's excellent student exam, he suddenly realized that computer science was a highly logical subject and very widely used in everyday life. I started learning more about IT and started loving programming from there. After listening to the sharing of an older brother and learning more about the school online, I found the UIT an ideal place for me to study and develop myself. In addition, in recent years UIT has made remarkable achievements such as three consecutive years have won the first prize 'Students with information security' and last year won two second and third prizes the more I feel no regrets about my decision that day. "

“Unlikely to achieve such accomplishments if not study at UIT”

When asked about information security as well as learning environment in UIT, Thong-Thai brothers are very interested. Thong shared: "Our school is very focused and invested heavily in the contest on information technology. Every school summer open a basic algorithm class so that students do not have much knowledge of algorithmic programming can learn, in the first semester there will be advanced algorithms class. The University also has a UIT ACM Index system where students can compete for a ticket to the Vietnam Student Information Olympiad and the ACM ICPC International Student Programming Contest. To achieve a high ranking in this system, the students have to undergo about seven competitions in the school and the North-Central-South qualifiers”."If I go to another school I'm not sure I can achieve that. Because of my own efforts, I also have a great deal of help from lecturers and UIT that I can hardly find elsewhere. "

“Love to the end" with Information Security

Sharing about the discipline that the two brothers are pursuing, Nguyen Van Thong said, "Talk about the information industry, I just say is 'love to the end.' I like this field very much. The Honor Programs that we are learning is more preferable than the Regular Full-time Programs as the better facilities and highly qualified instructors, experienced experience. Moreover, I have the opportunity to meet with excellent students in the school to help me be able to study better.

Thai added, "Through advanced study programs, as well as academic competitions such as ACM, CTF, ... me and my friends have more opportunities to work in businesses. In addition, the UIT also organizes extracurricular activities such as soft skills classes in English, helping learners to communicate and interact with people around them better. "

Two talented boys from this program hope: "Once graduated, we will be the manager of information security projects in the company."