From the old components, damage computers, the students of the University of Information Technology Ho Chi Minh City has restored and assembled to bring to remote children. 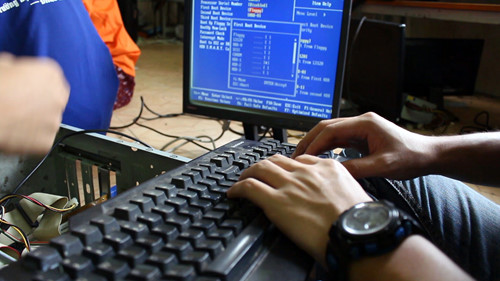 Inside the small room just over 40 square meters filled with CPUs, old computer screens. Each student with their own tasks, disassembling the machine, cleaning the components, ... creating a lively atmosphere. In the corner of the room, a group of three students are busy to milling dusted, old CPUs, and then take the components attached to the test drive, hoping to find a few components to use. After nearly 3 hours of "operating" the old CPUs, the team found only good 2 motherboards and 3 Ram.

Trinh Minh Toan - Team leader of "Old computer - new knowledge" said: "The whole amount of computers and CPUs are from the people in the team mobilized from the people, so most are extremely damaged. The well-functioning machines will be marked and stored in the warehouse, while the extremely damaged machine will be disassembled components by the team. 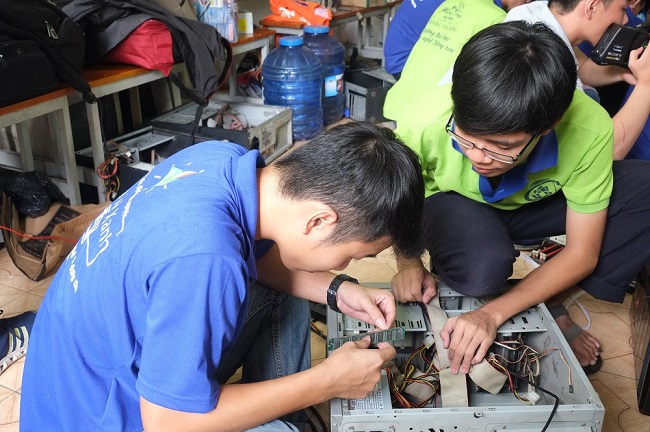 Students disassembled CPU to get the remained parts

Since all components and computers that you collect have expired, it is very difficult to assemble a complete computer. "Older parts are no longer usable, so I collect to sell away to raise funds from that. At the same time, individuals will spend their own money to buy new components if they need them for assembling the new computers "Toan said.

Most of students participate in the program "old computers - new knowledge" with the volunteering spirit. They want to contribute for social works. Until now, the team has 30 members, freshmen and sophomore in the regional universities. They spend all their summer vacation coming here to work together for the future of children in remote areas. Although some of students are not specialized in computer, but they still come to register.

Do Thi Thi Hai, a student at Banking University HCM City said: "Joining this program, i learnt from the other students the way how to distinguish each components, which is still usable and which is not. What I was most impressed is the trip to receive components in the provinces, I feel very tired, but I think after we collect the enough components, there are many new computers assembled, immediately I feel no more exhausted. 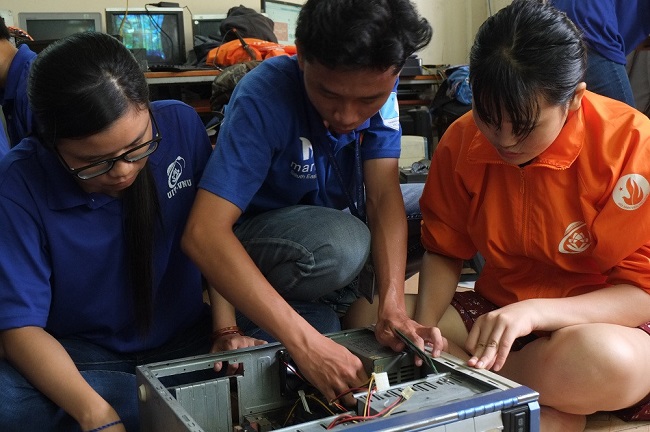 Students are discussing how to overcome the difficulties while assembling.

After the computers have been repaired and successfully operated, the team will contact the local authorities and remote areas Trade Unions to select the school which are lack of conditions and have the necessary demands for computers. Students will directly deliver computers to that place. Over 9 developing years, the team has awarded more than 300 computers to more than 6 provinces in the Southern Vietnam. In this year's green summer campaign, the team is expected to offer 2 computer rooms, each with 10 computers in Giong Trom Ward (Ben Tre Province) and Hon Chuoi Island (Ca Mau Province).

"The team works all day of the week. Especially, in the peak season, these students will work until 9 pm. Since these computers are made from old components, the team will come here to warranty these computers once in 3 month and repair them if needed" Toan said.

The activities of the program "Old Computers - New Knowledge" not only helps students learn more knowledge for their majors, but also allows them to know more about valuable life meanings